Kevin Churko Nominated for Juno for Engineer of the Year 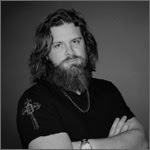