Austria Shows Off to Good Start

Previous Next
Austria Shows Off to Good Start 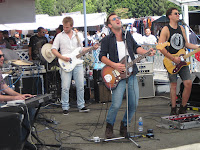 Austria’s first two shows were good, though Saturday’s show in Paramount was much better, due to the fact that there was a sizable crowd to check out the band. While Friday’s show at The Stardust in Downey was a really strong set, the band didn’t go on until 1am. Saturday’s show was an afternoon set and many people hung around to check out the group over a two-hour period. The guys play today at Great Park in Irvine.