Churko in the Studio with Emerson Drive

Previous Next
Churko in the Studio with Emerson Drive 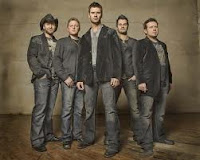 Kevin Churko is at his “Hideout” studios in Las Vegas, producing three songs for the upcoming Emerson Drive album. The group decided to take a break from Nashville and shake things up a bit for their next release, so they decided to hook up with old pal and fellow Canadian, Mr. Churko. No album release plans, as of yet.