Previous
Great Songs You Might Not Have Heard Of 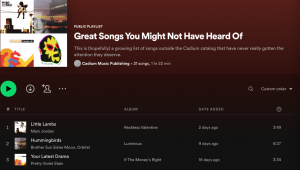 Cadium Music Publishing has added an additional playlist to its Spotify account. Titled, Great Songs You Might Not Have Heard Of, the list shines a light on non-Cadium tracks that haven’t received the attention they deserve.

The obvious question is why would Cadium do that?

While Cadium is proud of its writer roster and always wants more people to be exposed to the many great songs in its catalog, there is never enough great material being exposed to consumers. (How many times do we complain about some of the mediocre music on the airwaves?)

Another reason is that this list can serve to extend a lifeline to artists who are looking for great material that just happens to not be in the Cadium toolbox. Too often in my career I have come across a great talent – signed or un-signed to a major label – that doesn’t have the songs that stand the test of time. (Years ago I read a Billboard article that said that the success rate of artists signed to major labels is about 1 in 10.) I would like to think that this alternative list, which continues to grow, will become a sort of oasis where writers can check out some great music and possibly be inspired by it, resulting in writing their own hit.

Great Songs only has about 20 tracks as of this writing, but the objective is to add at least one new track per week. An additional track per week can amass quite a bit of great material after a year. Genres in the playlist typically will be rock, pop, singer/songwriter, country and R&B with a few hybrid genres along the way. Full Disclosure: Some of the tracks included are from artists I have worked with in the past.

All comments are welcomed.