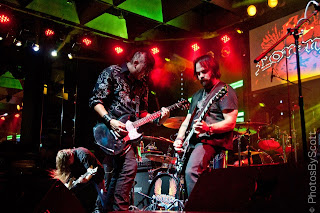 Lorenzo will be heading out on the road in May in support of their latest album, Ignition.

The tour, which hits the Midwest and East Coast in May and June, brings the band back to the more conventional style of touring, rather than playing spots dates like they did last year with Fuel.  Marko, lead singer and guitarist of Lorenzo, is undoubtedly happy going out on tour for an extended period of time.
“It’s been too long since we’ve been out for a string of dates,” says Marko.  “What’s exciting is that we’re going to a bunch of places that we have never played.  This will be the first time in the Northeast for us and that is exciting because we can finally go see the fans that have been asking us to make it out there.”
Apparently, fans have been vocal about the group’s impending stops, which include Newport, KY, where the tour kicks off, May 24.  Some fans, however, feel a bit slighted, as the guys aren’t scheduled to hit certain spots yet, but Marko is optimistic.
“The fans from the cities we are not playing all ask, ‘Why aren’t you coming here?’  Well, there will be more dates announced, so I’m hopeful that we’ll get out to Denver, Minnesota and Iowa, for example,” adding that, “It’s nice to see everyone so involved and actually working hard to get us out (on the road).”
Lorenzo has a history playing the Midwest and parts of the South, especially Cincinnati and northern Kentucky, but the East Coast is a big question mark.  Still, Marko reports that the welcome, so far, is warm.
“We’ve been pleasantly surprised that in a world of fewer places to play that we are able to get to the places we have never been. There are actually clubs that are excited to have us – that really gives us the energy to do a long list of dates. We can’t wait to get there!”
And the line-up for the upcoming tour is a bit different. “One of the things I am really excited about,” quips Marko, “is having a slightly different line up this tour.  Aaron (Farrier) on drums and Stu (Stuart McConnell) playing guitar is the same, but we’re adding a new bass player, Julian Simonelli.”  Marko goes on to say that, “Julian and I have been friends for a while and he is the ‘go-to’ bass player in Tampa.  He has played with everyone and is a true professional.  He’s originally from New York and has played with guys from Black Sabbath, Blue Oyster Cult, Ritchie Blackmore’s Rainbow, Miranda Lambert’s band and Nine Days.”
So what are the shows going to look like?
“Our shows in the past have all been very scripted and stiff,” Mark states.  “Some of that is required when we’re opening on a national (tour).  These clubs (referring to the upcoming shows) are a little smaller so we are really hoping to do whatever we feel like.  Hopefully, every show will be a little different and entertaining to our fans – and the friends they bring.”
Lorenzo Tour Dates
5/24/13 – Thompson House – Newport, KY; 5/26/13 – Backwoods Bash – Tulsa, OK;  6/05/13 – Gottrocks – Greenville, SC ; 6/09/13 – The Central – Hammonton, NJ;  6/13/13 – All-Star Sports Bar – Manchester, CT;  6/14/13 – The Contab Lounge – Cambridge, MA;  6/16/13 – The Stanhope – Stanhope, NJ
According to band sources, more dates to be added.
Jan Seedman2017-09-05T01:22:09+00:00April 19th, 2013|Aaron Farrier, Black Sabbath, Blue Oyster Cult, Cadium Music Publishing, Ignition, Julian Simonelli, Lorenzo, Lorenzolounge.com, Marko, Miranda Lambert, Ritchie Blackmore's Rainbow, rock, Stuart McConnell, tour|0 Comments