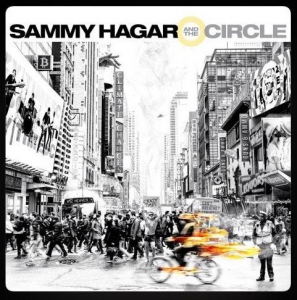 Michael James and Jaimeson Durr have mixed two songs in Dolby Atmos for Sammy Hagar. More specifically, the mixes are for Sammy’s band, Sammy Hagar and the Circle and their upcoming album, Crazy Times. The two tracks are “2021” and “Father Time (Acoustic).” Crazy Times comes out Friday (September 30).

Before we get into the details of Michael’s work on the project, a quick review of what Dolby Atmos is and why it matters.

Dolby Atmos is what is termed as immersive audio. This means that in addition to the surround sound experience, which allows the listener to receive audio from the front, back and sides, Dolby Atmos adds a height dimension. The end result is a more satisfying listening experience that can give the listener the sensation of being in the middle of the room and listening to the various instruments of a recording from all angles, thus immersive. The immersive audio technology is rapidly moving towards becoming the standard when it comes to music mixes. Currently, you can stream music in Atmos via Apple Music and the premium tiers of Tidal and Amazon.

How the Hagar Sessions Came Together

James was tapped for some of the Hagar mixes by producer/mixer/engineer, Jaimeson Durr. Durr, who produced and mixed Hagar’s previous album, has a long history of working with the Red Rocker on various records. When the topic of Atmos came into the conversation for the new album, Durr knew where to turn. The northern California-based studio maestro hand-picked James specifically for his deep knowledge, expertise and success mixing in Atmos. James is also one of the early mixers to embrace the immersive technology. (James’ most recent album, Shelter in Place, was mixed in Dolby Atmos.) Hagar, who has had an extraordinary career over the years (Montrose, Van Halen, very successful solo act, among other projects) lends plenty of credibility to James by having him come on board for the project. James, who is also located in the northern California area, mixed the two songs with Durr at James’ Atmos-ready studio.