The Lack of Song Quality in Today’s Rock Acts

Gene Simmons continues to claim that rock is d 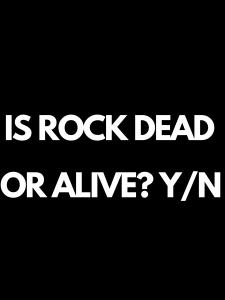 ead. The ongoing dialogue by Simmons and others on this topic fascinates me, because the lack of song quality in today’s rock acts rarely, if ever, enters the          conversation in this debate. In an article in Metal Injection by Greg Kennelty, Kennelty takes on Simmons’ point of view on the life or death matter, and while I don’t believe that fans killed the genre due to streaming, a Simmons opinion, some subscribers to Metal Injection offered their reason for the lack of dominance in the genre. While I respect some of their views, the problem is that there didn’t appear to be any comments (as of this posting) that mentioned song quality.

If rock is dead, there wouldn’t be multiple rock stations playing new rock music, with some of those acts on the charts, which there are. In Kennelty’s article, he at least partially backs that up, mentioning Machine Gun Kelly and Ghost as riding the wave of the genre. If, however, Simmons is conflating rock’s life or death status with rock dominance, he might have a point. If we’re going to continue to debate why rock isn’t doing as well as it did in past decades, that reason inevitably comes back around to the songs, whether you like it or not.

For whatever reason, songs – the compositions that are the core of a musical act – rarely, if ever, get mentioned as the possible reason why rock doesn’t have the stranglehold on the charts it once did. I don’t know why that is. Perhaps it’s because those offering their opinion on the matter are not cognizant of the song’s importance. Maybe it’s because some are focused on the sound of the act, barring the quality of the material. I don’t necessarily know the answer to this question, either. Regardless of that, the song quality matters, no matter what you sound like, what you look like, what region of the country you’re from or what your story is. If you don’t have songs with memorable hooks, you’re probably not going to last.

For a snapshot of what’s going on in rock, take a look at the rock charts, such as the Billboard rock chart or Mediabase. Look at what’s charting, then find the current tracks online and have a listen to them, if you’re not familiar. Do the songs on today’s charts have the same quality as “Fell On Black Days” (Soundgarden) “Baba O’Riley” (The Who), “Higher” (Creed) or “Rag Doll” (Aerosmith), to name just a few? My guess is that many of the newer songs at rock radio these days do not capture the same level of emotion and killer hooks, as the four tracks I just mentioned.

If the previous paragraph rings true, wouldn’t the logical next step be to take a harder look at what many current rock acts are creating and work on elevating their level of writing so that future material is at least as good as the hit songs from Lynyrd Skynyrd, Black Crowes, Heart and Kiss? As an A&R, that’s what comes to my mind immediately. Raising the level of songwriting leads to raising rock out of its supposed crypt.

So, in conclusion (until the subject comes up again), rock is not dead and fans did not kill the genre, but the lack of song quality in today’s rock acts needs to change for the better. Can the songs have an increased commercial potential so that the label and the artist are both happy (as well as current and future fans)? Yes, I know from experience. Will acts and those in A&R work to improve the level of content? We’ll see, and I hope so.